Quantum computers will change the world by unlocking a new computational paradigm: giving us the power to solve the fundamental equations of quantum physics, accurately simulate nature on a molecular scale, and design revolutionary new products. But today’s quantum computers cannot realise these transformational possibilities because their fundamental components, qubits, are highly error-prone. It’s not enough to simply build quantum computers with more qubits – to unlock the full spectrum of applications of quantum computing we need to design and implement systems that enable quantum machines to rapidly detect and correct their own errors.

To understand this challenge, let us zoom in on the qubits. The quantum nature of qubits, while it gives quantum computers their power, comes with a downside. Qubits are incredibly sensitive to disturbances from their environment. In fact, nature prefers it this way, baking in this natural tendency into the laws of physics. This sensitivity means that qubits often fall out of the precisely inter-connected states we need to construct to run algorithms on a quantum computer, a phenomenon known as decoherence. Every operation we want to perform on a qubit also has some chance of introducing an error, ultimately meaning that there is a hard ceiling on the length of the programs we can run before the computer is overwhelmed by errors if we let them accumulate.

Errors in today’s quantum computers limit their application to exploration and discovery. If you really want to make a commercial case for quantum computing, you have to break through the quantum error correction barrier.

How do we break through this ceiling and unlock the full potential of quantum computing?

To get to useful quantum computers we need to dramatically reduce the error rates for operating on quantum data. Some of this gap will be addressed by hardware improvements as physicists and engineers get better at building more stable qubits, but these alone won’t be enough to allow us to run algorithms with millions or billions of operations reliably.

Fortunately we can get to useful quantum computers more quickly than these numbers suggest, in part because quantum information theorists and computer scientists have been working on the problem of correcting system errors in quantum computers for more than 20 years. This theoretical research has led to the development of a wide range of methods for performing quantum error correction, approaches which mitigate errors by encoding information redundantly across multiple qubits.

As an analogy, imagine your friend asks you to confirm your phone number over a noisy phone line. You don’t want them to mishear you, so you repeat each number three times: instead of 07209 you say 000777222 etc. Then, if your friend hears 001 they can be fairly sure that the first digit should be a 0. Quantum error correction works in the same way, spreading out information across multiple qubits to protect it.

However, there are a few additional quirks of quantum mechanics that make things more difficult. Quantum theory dictates that we can’t simply copy the state of a qubit, and we also can’t measure qubits directly without destroying some of the information stored in it. In practice these complications mean we need to use additional ‘syndrome’ qubits whose function is only to indirectly measure what’s going on in the data qubits that store the information – we need the proverbial canaries in the coal mine. 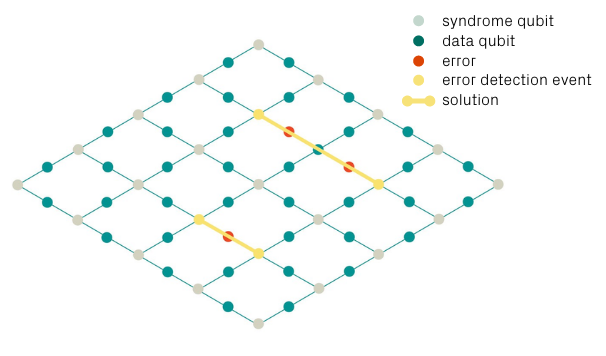 Quantum error correction provides a powerful set of theoretical tools for understanding and addressing errors in principle … but it’s just the first step on the path to dealing with errors in practice. Building an error-corrected quantum computer, one that can perform error correction across thousands of interconnected qubits millions of times per second, is the biggest scientific and technical challenge our industry faces. It is not just a matter of the theory of error correction. Instead we need to solve a serious system integration and classical computation task, each second performing one quadrillion operations to process as much data as Netflix streams globally.

Riverlane is uniquely placed to take on the error correction challenge – we have built a world-leading quantum engineering team creating the operating system for quantum computers to tackle practical error correction at every level of the stack.

Solving the practical challenges of error correction provides a universal interface for applications, making hardware more accessible and opening up the opportunity for many different developers to target many different physical platforms. This interoperability, and the ability to run long programs across many qubits, provides the best chance at unlocking the high-value applications of quantum computers, sooner.